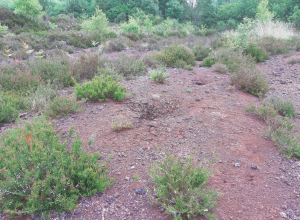 The Irish Peatland Conservation Council (IPCC) welcome the imminent publication of the 100th Irish Wildlife Manual commissioned by National Parks & Wildlife Service and funded by the EU LIFE Project Restoring Active Raised Bog in Ireland’s SAC Network 2016-20. By extensively studying the many types of peat-forming vegetation that grows on cutover (formerly cut for turf) raised bog a classification scheme has been developed that describes the habitats that may be present on these cutover areas.

IPCC are delighted because such a key is long overdue and is something that we have been advocating since 1999 when we undertook a study of cutover bogs and discovered many fine wildlife rich area.

“It is so important to discover where active peat forming bog vegetation still exists as the habitat has been almost driven to extinction” says Mr Tristram Whyte – IPCC’s Conservation Policy Officer.

The IPCC were invited to make comments on this user-friendly document which we hope will help the public and interested parties to identify areas of high conservation value in their community. Ireland has set a target of 3600ha of active raised bog within the Special Areas of Conservation and Natural Heritage Areas Network but currently they hold as little as 1639ha.

It will be necessary to restore over 400ha of cutover habitats within the designated network and a further 1561ha will be restored within the uncut high-bog reserves over the next 15 years. Only in this way will we meet this target and prevent the habitat from going the same road as the dodo – the path to extinction.

The Irish Peatland Conservation Council is a charity (Chy6829) that aims to conserve a representative portion of Irish Peatlands to enjoy today and in the future.

Irish Wildlife Manuals is a series of contract reports relating to the conservation management of habitats and species in Ireland. The volumes are published on an irregular basis by the National Parks and Wildlife Service.  Further information https://www.npws.ie/publications/irish-wildlife-manuals.