Today Ireland can boast to having one quarter of a million hectares of conserved peatlands in Europe.  Before the 1980’s there was very little thought of peatland conservation in Ireland.  This changed with the help of the Dutch nation and the Dutch-Irish Bog Conservation campaign to save  bogs in Ireland.

Since 1983, IPCC have been working with Dutch peatland conservationists to purchase peatlands in Ireland, develop education materials and organise exhibitions highlighting our work together.

Industrial mechanisation of peat cutting led to the exploitation of most of the Dutch peatland reserves.  It was only then the Dutch people realised that they had destroyed and lost their peatland heritage. The Dutch Government decided to take action and in 1974 set out a five step Peatland Conservation Plan to aid in the restoration of some of their peatland heritage.  At the time it was published it was the first of its kind in Europe.  The Plan, which will take 50 years to complete includes five steps:

This five step plan resulted in the Dutch Government acquiring the last remaining 8,000ha of peatlands and to date they have spent almost €100 million on peatland restoration projects in The Netherlands. The Bargerveen Bog in the north east of the Netherlands is one of the last bogs remaining. Watch our video about this cultural landscape. They also opened the Veen (Peat) Museum in the East of the country to educate people about peatlands.

Just like The Netherlands, turf was cut by hand  for many years in Ireland.  The hand cutting of turf was very slow and as a result very little exploitation occurred on the peatlands of Ireland.  However in the mid 1940’s Ireland began to commercially develop its peatlands.  This continued unchecked until the Dutch peatland scientists arrived here.

Dutch Action to Save Irish Bogs 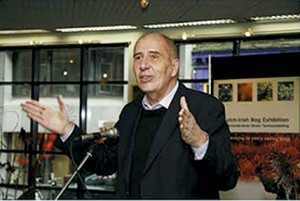 In 1978 Matthijs Schouten (left), a Dutch research student came to Ireland to complete a project for university. On arrival Matthijs was shocked at the extent of commercial development on Irish peatlands and distressed that no thought was being spared for the conservation of some of these sites.  So when Matthijs returned to The Netherlands he decided to take action for Irish bogs before time ran out.

Matthijs set up the Dutch Foundation for the Conservation of Irish Bogs (Stichting Tot Behoud Van de Ierse Venen) and for three years campaigned tirelessly to raise enough funds to purchase three peatlands in Ireland.  At the same time the Irish Peatland Conservation Council (IPCC) was set up to conserve a representative sample of peatlands and to act as a watchdog for Irish peatlands.

The Dutch raised funds by organising: 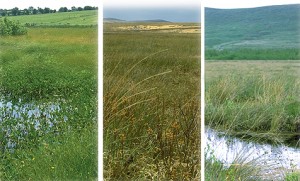 By 1987 the Dutch Foundation had raised enough funds to purchase three peatlands in Ireland. These were: Scragh Bog, Co. Westmeath (above left); Clochar na gCon Bog in Co. Galway (above centre) and Cummeragh River Bog, Co. Kerry (above right). The Dutch Foundation then handed these sites over to the Irish Nation as a gift.

Raising awareness was vital to the Dutch campaign. They organised a touring exhibition entitled De Venen Geturfd, published The Face of Ireland (an anthology of literature) and a supporters newsletter entitled Ierse Venen.

In 1987 both the Dutch and Irish Governments signed a technical agreement for co-operation in the area of peatland management and restoration.  Raheenmore Bog and Clara Bog in County Offaly were the chosen study sites.

The insights gained were used in the Irish Raised Bog Restoration Programme (1994-2000) to identify raised bogs for designation as Special Areas of Conservation and in the planning of rehabilitation measures on sites in the two countries.

A synthesis of the findings of the research programme have been published in the book Conservation and Restoration of Raised Bogs. Geological, Hydrological and Ecological Studies 2002, edited by Matthijs Schouten.

Not only scientific researchers have been inspired by the peatlands of Ireland, for years people have been singing, dancing, painting, writing, sculpting and above all speaking in many different voices about bogs.

The energy and enthusiasm of the Dutch people stimulated action for bogs in Ireland as follows:

Over 30 years have past since the peatland connection between Ireland and the Netherlands was formed and today with both the Irish Peatland Conservation Council (IPCC) and the Stichting Tot Behoud Van de Ierse Venen still actively promoting the conservation of a representative sample of peatlands for future generations to enjoy our story continues.

With funding support from the Stichting Tot Behoud Van de Ierse Venen two IPCC staff members travelled to the Bargerveen reserve in the Netherlands. They met with rangers from the Staatsbosbeheer, the government agency charged with the restoration of Bargerveen in the 1980’s.

At Bargerveen in 1980 a small portion of less than 100ha of peatland habitat remained. To ensure its future a series of peat dams and later boulder clay dams where built to raise and restore water levels around the site.  Rangers learned that to create ideal conditions for peatland habitat to thrive there should be no more than a 30cm change in height over 100 metres distance. Water level monitoring was started to record the progress on the site over the next 30 years. 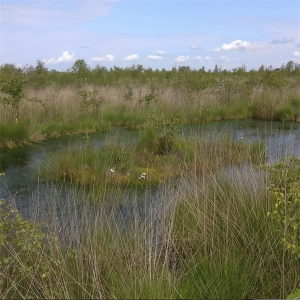 Today Bargerveen is a 2000ha nature reserve. The peatland is restored to encourage the growth of Sphagnum  mosses.  The dams have regenerated as wet grassland while the pools created 30 years ago between the dams have partially filled with Sphagnum moss species.  Some highlights from IPCC’s visit include:

From the left: Partially filled bog pool with Sphagnum moss, sheep grazing to maintain open habitat and an example of one of the information points in the International Naturpark designed using the traditional shape of turf houses.

There are still challenges facing the peatlands of the Netherlands.  IPCC staff learned how local farmers graze cattle and sheep to manage encroaching tree saplings.  The invasive species of Japanese Knotweed introduced as a fodder for cattle was seen among native species and an emerging threat to the site was the volume of nitrogen deposition from industry that is affecting the growth of sensitive plants.

Thanks to the partnership between the Netherlands and Ireland Irish peatlands are not in the same position as the Netherlands faced in the 1980’s but we can learn lessons from their experiences in restoration over the past 30 years so that into the future the Dutch and Irish bog story will continue.

Work Still Needs to be Done for Irish Peatlands

While much has been achieved the following actions are now crucial:

In addition to purchasing three bogs for conservation in Ireland, the Dutch Foundation set up a study fund to promote research into the conservation of Irish Bogs. The funds are to be used to cover costs of travel and accommodation up to a maximum of €2000. The Foundation are currently interested in receiving applications from interested bodies. The closing date for applications is 31st January each year with decision made after 1st April. Please follow the links provided below if you are interested in applying for aid.

What Can You do to Help?