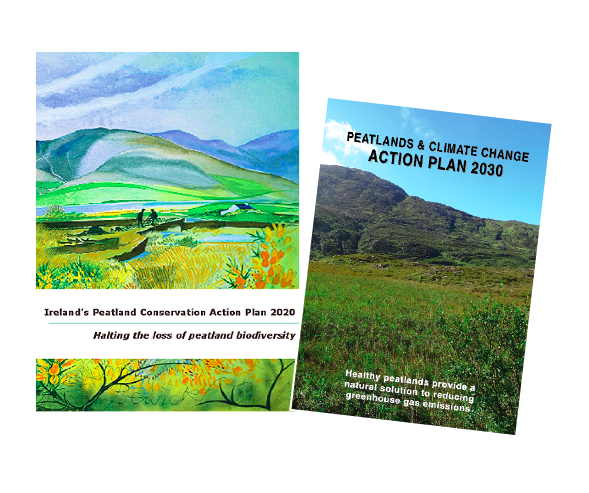 Since the Irish Peatland Conservation Council was founded in 1982 the charity have prepared seven Action Plans to guide the ‘Save the Bogs’ campaign.  In 2009 in response to the United National Decade of Biodiversity Ireland’s Peatland Conservation Action Plan 2020 – Halting the Loss of Peatland Biodiversity was published.  The campaign developed around this action plan focused on peatland biodiversity and it achieved key milestones such as the development of a National Peatland Strategy, the development of new research and understanding on the ecohydrological functioning of raised bogs and the preparation
of site conservation and restoration plans for raised bogs.

The seventh and latest Action Plan Peatlands and Climate Change Action Plan 2030 covers the decade to 2030 which coincides with the United Nations Decade of Ecosystem Restoration.  The theme of the Action Plan is climate change, in recognition of the vital role that peatlands play in the carbon cycle and their potential through restoration and rehabilitation to mitigate Ireland’s greenhouse gas emissions.  With this plan the Irish Peatland Conservation Council are bringing together all of the relevant research on peatlands and climate change. This includes measuring the extent to which man-modified and relatively intact peatlands are contributing to climate change, how restoration and rehabilitation can reduce greenhouse gas emissions, analysing changes needed in peatland policy and providing a roadmap of actions to ensure peatlands are managed in a carbon-neutral manner.

In 2019 the Irish government declared a climate and biodiversity emergency.  The Peatlands and Climate Change Action Plan 2030 should be read in conjunction with Ireland’s Peatland Conservation Action Plan 2020 – Halting the Loss of Peatland Biodiversity.