Effects of Afforestation on Peatlands

Commercial planting of Lodgepole pine and Sitka Spruce on peatlands was a common practice in Ireland in the last century. The peatland was fertilised, with a phosphorus rich fertiliser. Drainage ditches were installed. The outcome is a fundamental change in the vegetation and ecology of the peatland.

Due to the effect of fertilisation, the natural peatland plants which have adapted to growing in nutrient poor conditions, die out quickly and are replaced by more vigorous species such as Moor Grass (Molinia caerulea). So the immediate effect of afforestation is to eradicate the natural peatland vegetation. Subsequently the peatland vegetation is replaced with dense stands of conifers with few other plants.

Afforestation also leads to a thinning out of breeding bird populations on adjoining unplanted peatlands beyond the forest boundary. The new forest gives increased cover for foxes and nesting habitats for carrion and hooded crows. This leads to over predation of the adjacent unplanted areas particularly of young birds. Studies undertaken in the blanket bogs of the Flow Country in Scotland showed that there was a 19% reduction in Golden Plover numbers. 270ha is the minimum conservation area needed to maintain the natural bird populations of blanket bogs.

Ploughing of the peat increases water run off and flash flooding. There is erosion and cracking of the peat mass. This causes the build up of peat sediment in streams.

The major chemical effect is nutrient enrichment of peat, soils and waters by fertilisation associated with tree planting. This causes local eutrophication, leading to algal blooms in lakes and reservoirs. Sedimentation and acidification of rivers affects fish spawning, particularly of salmonid species.

The main requirement for the success of forestry plantations on peatlands is drainage. Drainage removes one of the most crucial criteria for the surival of peatland plants, such as Sphagnum moss, which rely on saturated conditions for survival. Without waterlogged conditions, many peatland plants simply cannot survive, and soon dissapear. The removal of the water exposes previously innundated peat to air, which speeds up decomposition. This causes changes in the peat chemistry and releases massive amounts of CO2 to the atmosphere. Also, since the supportive action of the water is removed, compaction of the peat occurs.

Another requirement for forestry on peatlands is fertilization, usually with a phosphorus rich formula. This has drastic effects on the ecology of peatlands even before the tree canopy forms to shade out the native flora. Peatland plants are adapted to growing in nutrient poor conditions. When fertiliser is applied they either quickly die out or are outcompeted by more vigorous species such as Purple Moor Grass.

When the trees are planted, they are packed very close together to promote tall straight growth while at the same time acting as a wind barrier. The canopy quickly closes and smothers out any vegetation growing beneath them. Trees act like large straws, sucking large amounts of nutrient containing water from the ground toward their leaves where it then evaporates. This removes water from the peat that would normally have remained in the peat. Trees can also intercept 30% of rainfall before it reaches the peat surface, further reducing the water content of the peat. The needles of conifers are particularly resistant to decay when they fall they accumulate into a thick carpet. when they finally decompose, the chemicals they are made up of further acidify the peat substrate. Water flowing through this peat picks up some of this acidity; and when this reaches adjoining rivers and streams it can acidify them to a point where it becomes unsuitable as a spawning ground for fish, including the economically important salmon and trout.

In addition to commercial forestry many peatland sites are being colonised by birch and pine trees due to the fact that they have been extensively drained or burned in the past during the process of turf cutting. In such circumstances birch and pine trees are regarded as invasive species and need to be removed. Trees intercept up to 30% of the rainfall reaching the peatland surface. In addition, they cast shade killing off the peatland vegetation.

Please note a felling licence must be obtained from the Forest Service before trees are felled. Their contact address is: Forest Service, Johnstown Castle Estate, Co. Wexford, Tel: 053-9163400.

The agency with the most experience in restoring former conifer plantation sites on peatlands in Ireland is Coillte. The most important step in the restoration of afforested sites is the removal of trees. The method of removal used depends on the age of the crop. If the trees are immature/low yielding and not of commercial value then they can be cut down with a chain saw and left in windrows on site to decay naturally. However; if the trees are mature and have commercial value they will be clear felled and the timber removed from the site. The remaining brush is gathered in windrows to clear the peatland surface as much as possible. These windrows are left on site to decompose. Another practice is to remove all tree material associated with commerial forestry from the peatland site leaving a “clean” site.

After the site has been cleared of trees, the drains are then blocked. Please follow the link to the  Restoration of Drained Peatlands for techniques.

Natural regeneration of seedlings from the commercial crop, or from wind-borne seeds of downy birch can often occur on sites once the trees have been removed. It is likely that this will continue many years after the initial clearance has taken place, even after the water table has been raised. These will have to be removed periodically by hand.

Coillte also recommend fencing off newly restored sites to reduce the effects of trampling through tresspassing or overgrazing by animals and also the installation of firebreaks to reduce the risk of fire damage. Please follow the link to the Restoration of Burned Peatlands for techniques.

A felling licence must be obtained from the Forest Service before trees are cut down or felled. Their contact address is: Forest Service, Johnstown Castle Estate, Co. Wexford, Tel: 053-9163400. 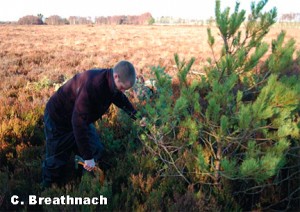 In the hand felling of trees, bow saws or chainsaws may be used. Trees should be cut down to as near to ground level as possible. Once cut, the stumps should be treated immediatley with SBK Brushwood Killer which consists of 48g per litre of Triclopyr. The recommended dose rate is 1:1 water:triclopyr. A food dye should be added so that stumps that have been treated can be clearly seen. All surfaces of cut stumps and bark down to soil level must be sprayed. Felled trees should be removed from the site.