A key issue in the conservation of bogs in Ireland is restoring the peat forming function of sites that have been damaged by turf cutting. Turf cutting has been greatly modernised in Ireland. It is undertaken by contractors with industrial grade diggers who drain the bog and remove the peat forming layer of vegetation from its surface.

Blocking drains on bogs does raise water levels in the peat and the techniques have been widely used in Ireland. But the Sphagnum mosses which are responsible for building bogs do not naturally regenerate on the bare peat. Intervention is necessary to make the bogs recover their peat accumulating functions within a reasonable time scale.

In Canada peatland managers have successfully developed techniques to cultivate Sphagnum mosses on an industrial scale on bare peat surfaces over a time line of just ten years. Peat formation is ensured by raising the water table through drain blocking and establishing a living layer of moss over a formerly dry, bare and eroding peat surface. Irish Peatland Conservation Council have been successfully trialing these methods in an Irish bog environment on our reserve – Lodge Bog since 2009.

The Canadian peatland restoration approach is based on the active reintroduction of peat bog plant species and hydrological management in order to raise and stabilise the water level. It consists of surface preparation, plant collection, plant spreading, straw spreading, fertilization and blocking drainage. The starting point for the restoration process is a relatively deep acidic peat substrate from which only horticultural grade peat has been removed.

For a more detailed description of the methods described above download the Peatland Restoration Guide: Second Edition by Francois Quinty and Line Rochefort.

To see a short movie about the methods involved in restoring a raised bog with Sphagnum moss watch this movie.

The photographs below show how the IPCC Sphagnum trial plots on Lodge Bog in Co. Kildare, Ireland. The plots measure 5m x 5m. Sphagnum capillifolium moss has been spread in one plot and this moss has been covered with straw in the other. Read IPCC’s poster paper presented to the International Peatland Society in 2015 about the successful five year Sphagnum restoration trials on Lodge Bog here.

On this site IPCC have also used the Sphagnum moss restoration method to restore part of Lodge bog that was badly trampled by visitors (2015) and to restore peat borrow pits created during the construction of peat dams to block drains (2017). 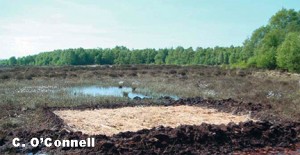 Following drain blocking and the creation of seasonal ponds in the cutover bog at Girley in Co. Meath, IPCC began a programme of Sphagnum moss restoration at this site. The work was funded by the Heritage Council through their grants scheme. Three Sphagnum moss restoration sites were established around temporary ponds and the results have been excellent as can be seen from the before and after images below. 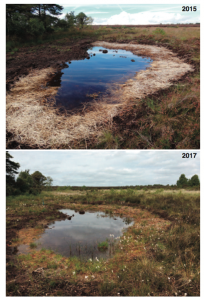 Supported by the Community Foundation for Ireland and Kildare County Council