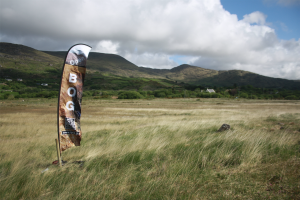 The species count for Coad Bog BioBlitz was 200 with 304 hours of observations from participants. The Blitz included hands on visits by all the children in Caherdaniel National School.

Participants combed the bog observing and recording as many plant and animal species as possible. Veteran BioBlitzer Ken Bond collected moths and other insects as part of the Blitz and even helped volunteers identify eggs of the Orange-tip Butterfly.

The BioBlitz put a spotlight on the value of science in Irish peatlands and offered a unique opportunity for the public to learn first-hand how important science is in managing peatlands for the future.

The Coad Bog Bioblitz that took place from the 20th-27th May in County Kerry was a wonderful success. The Irish Peatland Conservation Council (IPCC) gathered a large amount of essential information about the nature of the bog and the diversity of wildlife living on the site. This material will be an invaluable help in preparing a conservation plan for the bog later this year.

The top ten highlights of the BioBlitz included:

The IPCC would like to take this opportunity to say a huge thank you to all who took part in the Coad Bog BioBlitz. ‘It was a fantastic week full of exciting discoveries. It was brilliant to meet with the local people and hear about the history of the area. The local people were so friendly and supportive, we couldn’t have asked for a better welcome to County Kerry’ says Katie Geraghty, IPCC’s Campaign Officer.

The BioBlitz event was made possible through sponsorship by the Environmental Protection Agency under their EPA Research Programme 2014-2020 and supported by the Irish Environmental Network under their Biodiversity Events Funding 2016 and the IPCC’s Friends of the Bog.

If you would like further information about Coad Bog and the results of the BioBlitz contact Katie at bogs@ipcc.ie or call 045 860133.

This entry was posted in News. Bookmark the permalink.