Hop To It This World Wetlands Day with IPCC 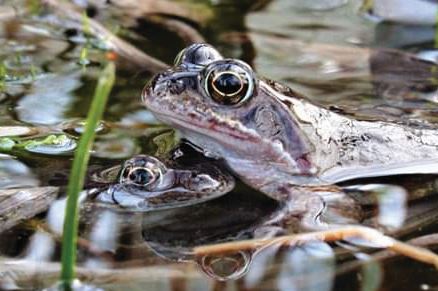 Hop to It this World Wetlands Day with IPCC

Celebrate this World Wetlands Day by taking part in the Irish Peatland Conservation Council’s fun frog quiz as the charity raises awareness and launches the Hop To It Frog Survey 2021. The 2nd of February marks World Wetlands Day and this year the theme is Wetlands and Water. Water is vital for the survival of all life on earth including a very familiar garden friend, the Common Frog, which is dependent on water to complete its lifecycle.   As its name suggests, it is a very common species in Ireland. It is found in a variety of habitats such as garden ponds, grasslands, hedgerows and wetlands such as bogs.

It is a myth that frogs need to be near a water source all year round. They are amphibious which means they can live comfortably on both land and water. During the colder months, you will more than likely find frogs hiding in long grass or in dark and damp places, hibernating. However, water is essential for the frog to complete its lifecycle. The male and female frogs return to water to breed, typically in Spring when the weather begins to warm. Each male competes against other males for a female by croaking. The female chooses her mate and breeding begins.  A special pad called a nuptial pad allows the male to grip onto the female.  Frogs are known for returning to the same source of water each year and the female lays hundreds of eggs.  Not all eggs survive as they are eaten by many predators, providing an essential food source as part of the food-chain.

In Ireland, the common frog (Rana temporaria) is protected by law under the Irish Wildlife Act and the European Union Habitats Directive. While its population on the IUCN Red List is stable (IUCN 2021), it faces numerous local threats, many of these threats are unnatural and caused by humans. The release of harmful chemicals from fertilisers and pesticides, the loss of habitat as a result of drainage and the habitat removal of wildlife corridors are just some to name a few. If you drive in the countryside, you might happen upon fields that no longer have a hedgerow to mark the boundary. These are essential wildlife corridors allowing frogs to move from a wetland or freshwater habitat to a terrestrial habitat. Removing these corridors increases the risk of predation. A frog’s skin is a special organ which it uses to breathe through under water. When harmful chemicals are present in a water source, these are absorbed through the skin causing death. Protecting this animal’s habitat is important for its survival.

IPCC’s Campaign Officer Paula Farrell says “A bog is a wetland which frogs are specially adapted to. This fascinating little animal has the ability to camouflage and blend in with its background essentially hiding in plain sight from predators. This makes them excellent hunters as they lay in wait for prey. They also provide an insight into the quality or status of a habitat just by their presence alone due to the sensitive nature of their skin. I feel it is incredibly important to protect this animal and its habitat”

The Irish Peatland Conservation Council co-ordinate the Hop To It Frog Survey. It began in 1997, and each Spring IPCC launch this annual survey in order to encourage people to get involved with this citizen science campaign and record their frog sightings. IPCC use this information to inform our policy work, track changes in the Irish frog population and protect essential wetlands especially where frogs are present.  You can submit your frog sighting online on the website of the Irish Peatland Conservation Council by visiting http://www.ipcc.ie/help-ipcc/hop-to-it-national-frog-survey-irelandcard/.

Although you cannot visit the Bog of Allen Nature Centre at this time, we will be hosting a World Wetlands Day Frog Crossword Competition 2021 for you to get involved. For those that are familiar with frogs, it will test your knowledge. For those who know little about frogs, you will learn something new. The first 10 people to answer correctly and send your completed frog quiz into IPCC will receive a hard copy of our Hop To It Frog booklet. Send your frog quiz by email at bogs@ipcc.ie or by post to Bog of Allen Nature Centre, Lullymore, Rathangan, Co. Kildare.

This entry was posted in Events, News. Bookmark the permalink.