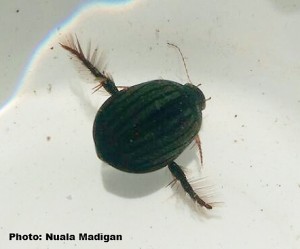 Last weekend I visited the Natural History Museum in London and attended a wonderful talk on beetles entitled ‘Beetlemania’ held as part of the museums Nature Live talks in the Attenborough Studio.  Although going into the talk I did not think beetles (Ciaróg) were the most interesting of wildlife that can be found in Ireland it did remind me of the screams of delight I hear from students when they catch water beetles from the ponds at the Bog of Allen Nature Centre. The Great Diving Beetle is the most spectacular of the water beetles.  It is a native insect found in freshwater habitats such as garden ponds, lakes, bogs and fens.  They prefer still or slow moving water and are fierce carnivores.   They will not only feed on water boatman, tadpoles and small fish but are cannibals feeding on other great diving beetles.  They are brown/black in colour and true to their name are large compared to other beetle species found in Ireland.  The young great diving beetle looks nothing like the adult and these young are referred to as larvae. The beetle larvae can grow to 2.5 inches in length and have strong pointed jaws that they sink into their prey releasing digestive juices.  The beetle larvae then suck up the resulting ‘soup’ formed by the digested prey.  Unlike fish neither the larvae nor adult of the great diving beetle have gills to aid breathing under water, both must rise to the surface of the water and collect atmospheric oxygen before diving to safety from predators under water. Like other beetles the great diving beetle has wings and can fly.  They usually fly only at night to avoid being caught by predators such as birds.  It is thought they use the reflections of the moon on the water surface to guide them to new wetland habitats.  This can sometimes result in farmers finding them in animal water troughs in fields or gardeners finding them in rainwater filled wheelbarrows.