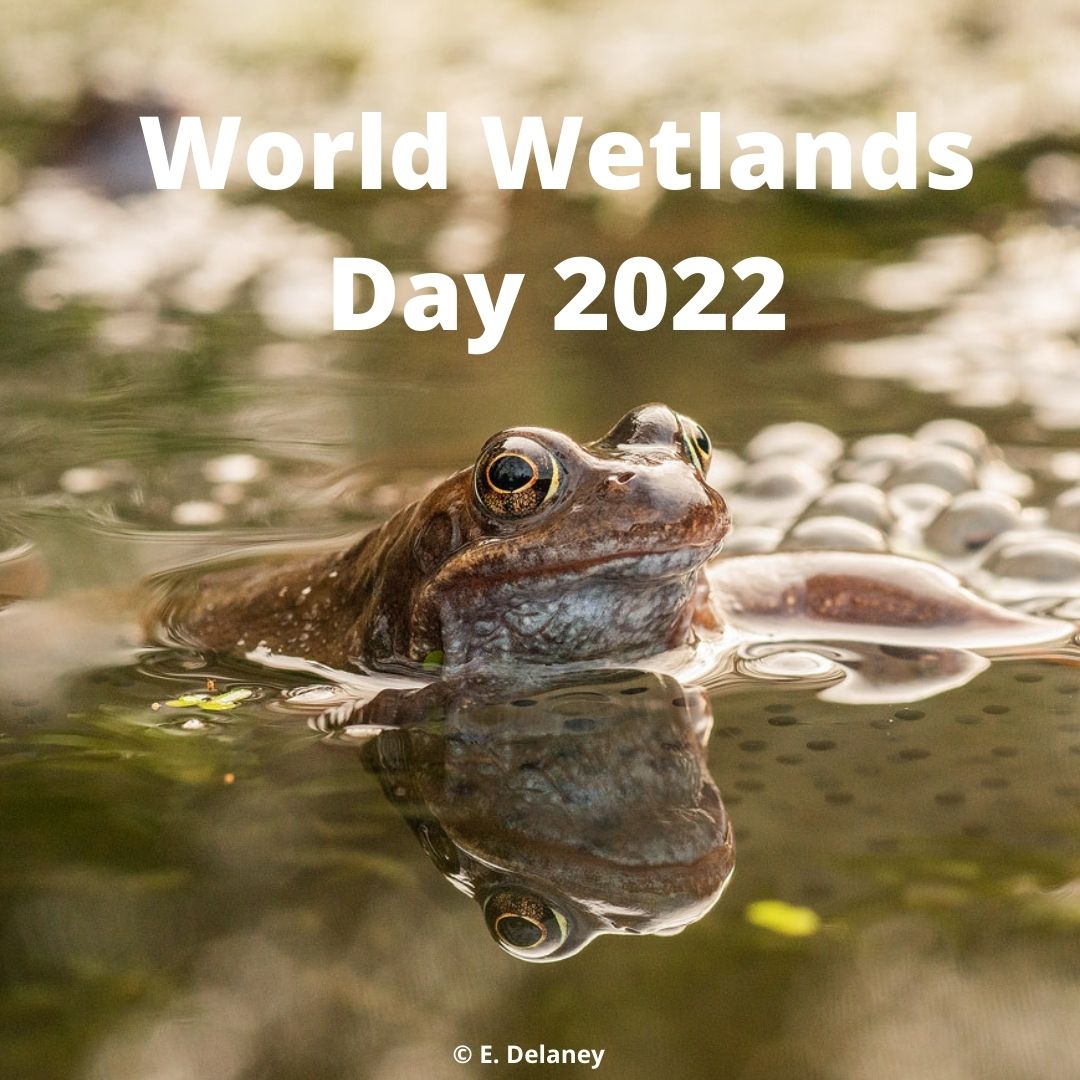 Celebrating World Wetlands Day 2nd February 2022, the Irish Peatland Conservation Council are launching their annual Hop To It Frog Survey. World Wetlands Day is celebrated every year to raise awareness about the importance of wetland habitats for people and biodiversity. The theme for 2022 is ‘A call to take action’ and what better way for you to take action then becoming a citizen science and reporting your frog sightings to the Hop To It Frog Survey.

Wetlands provide us with many services including a habitat for biodiversity, nutrient regulation, soil and sediment regulation, a water supply and recreation. However human activities including drainage, afforestation and land reclamation can have a negative impact on Ireland’s wetlands and their biodiversity including the Common Frog (Rana temporaria). The Common Frog is one of three Amphibians found in a variety of wetland habitats in Ireland.  These magnificent little creatures breathe though their skin while submerged beneath water. This makes them important indicator species that are sensitive to changes in their environment such as pollution and chemicals that can be absorbed through the skin.  An absence of frogs from an area would raise questions and throughout Europe, science is providing evidence that the Common Frogs populations are under pressure.  To help protect the Common Frog it is today protected under the Irish Wildlife Act and the European Union Habitats Directive.

Together we can make a difference no matter how small the action. With this in mind, the Irish Peatland Conservation Council are launching our Hop to it Frog Survey 2022. IPCC are the co-ordinators of this survey, which was established in 1997 and is Ireland’s longest running Frog survey. Records collected help to build a database on the distribution of the Common Frog (Rana temporaria) across Ireland. This data is essential in helping the IPCC to inform policy work, track changes in the breeding behaviour, population and highlights the need to protect wetlands in Ireland.

Paula Farrell, IPCC’s Conservation and Education Officer says “The Common Frog is one of my favourite animals. They are found on almost every continent in the world except Antarctica. I find it fascinating that the female frog can lay up to 4,000 eggs at one time. I encourage members of the public to get out in their local communities and explore the wonderful wildlife on their doorsteps and become a citizen scientist by reporting your frog encounters to the Hop To It Frog Survey on www.ipcc.ie or by sending their record by e-mail to bogs@ipcc.ie.”

This entry was posted in Uncategorized. Bookmark the permalink.